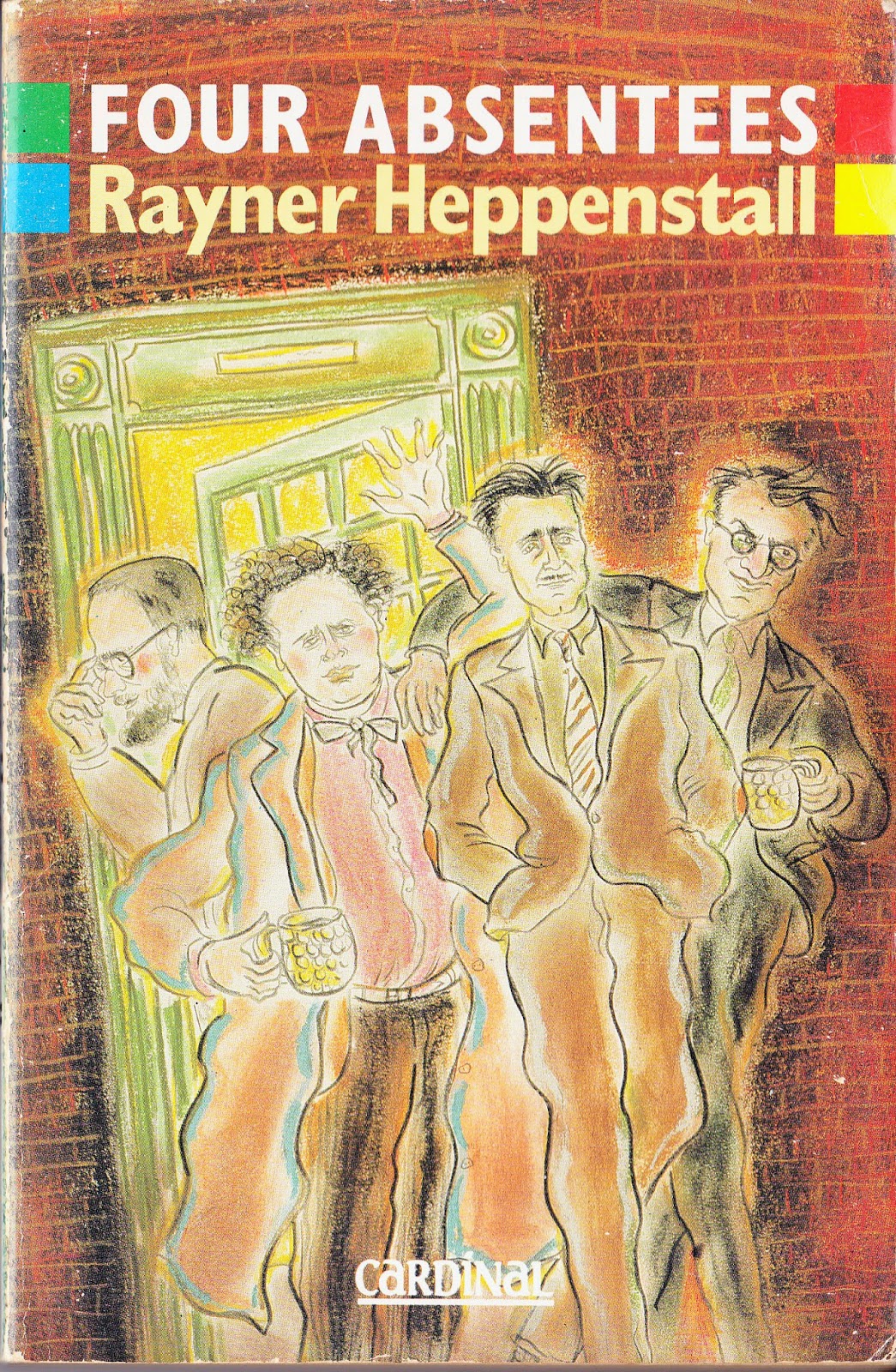 Another oddity this, not dissimilar to the memoirs of Julian MacLaren-Ross which I read and reviewed here earlier this month.  Indeed, it was the mention of Heppenstall in the MacLaren-Ross book that made me wonder if Heppenstall had written anything in a similar vein.  The answer is yes, quite a bit, of which this is just one.

Heppenstall was a bit of a poet, an experimental novelist, a writer of at least one book on ballet.  A peripheral figure on the London literary scene of the 1930s but not an absolute soak like MacLaren-Ross and Dylan Thomas.  This is a memoir of four absent friends, and what an ill-assorted bunch they are.  From left to right in the spiffy cover art by Natacha Ledwidge: John Middleton-Murry, much married critic, socialist utopian, best known for having married Katherine Mansfield; then Dylan Thomas himself; then George Orwell; and finally the incestuous sculptor, graphic designer and self-made monk Eric Gill - all of whom were dead by the time Heppenstall wrote this in 1960.

Heppenstall would seem to be the sole link between them - but how well did he really know the much older men, Murry and Gill?  Not very well would seem to be the answer.  Dylan he knew reasonably well, and a highlight of the book for me is Heppenstall's two-page dissertation on the subject of Dylan's death - suicide or accident?  Orwell he knows best of all, having shared accommodation with him until Orwell drove him out one night with his shooting stick.  It's annoying that Heppenstall insists on calling him Eric Blair and always putting inverted commas round 'George Orwell'.  Yes, it's accurate because Blair didn't become Orwell until after he and Heppenstall went their separate ways, but we know him as Orwell and we are only interested because of his Orwell fame.

After the war Heppenstall joined the BBC (radio, naturally) and became a producer.  As such he was able to offer his friends work.  Gill had long since died, but the always impecunious Murry did one of Heppenstall's "Imaginary Conversations" between Keats and Coleridge.  Orwell was offered one between Pilate and Lenin, which would have been interesting, but didn't do it.  He did, however, provide a dramatization of Animal Farm for his former flatmate.

It's odd the sort of thing people used to be able to publish.  We certainly wouldn't get away with something this flimsy nowadays.  Heppenstall is a pedantic writer (the commas are wildly out of control) and there is far too much of Heppenstall in a book that professes to be about the other four.  Still, it throws an interesting light on the literary scene before and immediately after World War II.  There are lots of authoritative studies of Thomas and Orwell that seem to me not to know it.  As it happens, I have Dylan's letters on my desk and there is a mention there of the shooting stick incident which the editor has been unable to place.