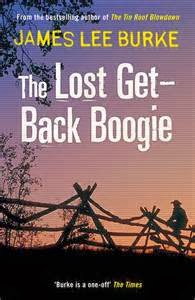 Another non-Robicheaux, non-genre novel from Burke, this from 1986 and nominated for a Pulitzer.  No wonder.  This is a genuine, deeply-considered novel of rural America.  Iry Paret is released from Angola Prison in Louisiana after killing a man.  He gets permission to serve out his parole in Montana, with a friend from prison, Buddy Riordan.  Iry plays hillbilly music on guitar, Buddy grooves on jazz and LSD.  Having just buried his own father (his mother died in a fire strongly reminiscent of the real-life drama of the young Woody Guthrie) Iry comes under the sway of Buddy's old man, Frank, an oldstyle ranching man bent on closing down the paper mills that provide most of the employment in that neck of the woods.

If anybody doubts Burke's gifts as a writer, they should read The Lost Get-Back Boogie.  Just as Iry makes his guitar sing, Burke has crafted every sentence of his story.  There are no wrong notes here.  It is a novel of history and character with the plot entirely and equally derived from both.  I can't recommend it too highly.

I see from Burke's website that he wrote a Civil War about ten years ago.  That's a must for me, then.