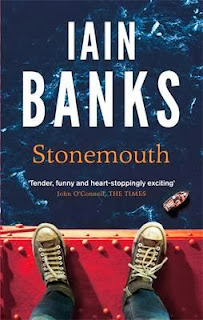 Having recently read The Crow Road I pounced on this, his penultimate novel.  Actually it covers much of the same ground as The Crow Road - young Highlander returns home from the city to face his demons - but handles it in a very different way.  In Stonemouth (which is the name of the 'toun') the rich folk are actually drug runners with aspirations of gentility.  The Murston family ran young Stewart out of town five years ago for gross disrespect.  Only now is he allowed back, paradoxically to pay his respects at the funeral of the patriarch Old Joe Murston.  But there are terms - the funeral's on Monday and Stewart is expected to head back south first thing on Tuesday.  Or else.