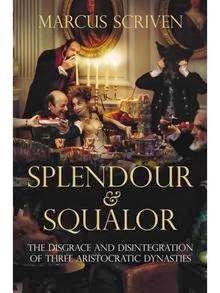 Splendour & Squalor, Marcus Scriven's first book, is a study of three appalling aristocratic families which rather proves my suspicion that great families start with one great man (or woman, in the case of Bess of Hardwick) and then never produce another worth spit.  What we have here is two dukes and two marquesses.  The title 'marquess' is itself a clue - too rich for an earl, nowhere near respectable enough for a dukedom.  The dukedoms here are not especially illuminating, the first (Leinster) the reward for heirs of the first transplantation of the second millennium who did 700 years' service keeping the native Irish downtrodden, the second (Manchester) granted to the Montagu family for services sucking up to both Cromwell and Charles II.  The marquisate of Bristol ... why that was ever created is just unfathomable.

The problem with three of our 'heroes' is that they never expected to inherit.  Edward Fitzgerald, 6th Duke of Leinster, had two elder brothers, one mad, the other a casualty of World War I.  Angus Montagu 11th Duke of Manchester likewise inherited from his brother whereas Victor Hervey 6th Marquess of Bristol, was 35 before he even became heir apparent.  All three then went on to marry often and usually badly.  Montagu and Hervey were also jailbirds, for fraud and burglary respectively.  Hervey's son and heir, John 7th Marquess, was gay and drug-addled.  He also did time before dying of Aids a few years after his younger brother and heir, who suffered from schizophrenia, hanged himself.  By and large all had appalling childhoods, though John's was definitely worst.  All frittered away their inheritance.  Fitzgerald died in a bedsit, Montagu in a rented flat, Victor in Monte Carlo and John in much reduced circumstances.  But they all have heirs and the line continues.

Scriven writes well, accentuating the sympathetic traits of his characters whilst not hesitating to criticise their excesses.  He guides us effortlessly through horrendously intertwined family trees.  In his epilogue he points out that whilst these parasites no longer have a God-given right to national governance, their life peer successors are not much better.  I particularly enjoyed the following:

"A decade earlier, the pretensions of that senatorial order had been advanced by the ennoblement of a pathological liar (championed by John Major), despite the protestations of the Honours Scrutiny Committee, whose misgivings were speedily vindicated when the fledgling peer was later imprisoned for perjury."  In fairness, Scriven even-handedly cites lords Taylor (cash-for-questions), Mandelson (cash for just about anything) and Watson (arsonist) from the Labour benches.

My one criticism is that Scriven promises detailed sources and extra notes on his website (click on the name above) and they're not there.  Bit shoddy, that.
Posted by rogerwood at 15:58