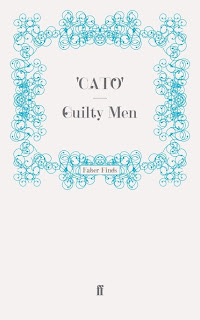 A truly great reissue by Faber Finds (if only they'd use Royal Mail instead of that slipshod private delivery firm, they'd be the publisher of my dreams).  Originally issued by Gollancz and boycotted by all nice Tory bookseller chains like W H Smith, this was the underground bestseller of 1940, shifting 200,000 copies in six months.  Written in the immediate aftermath of the Dunkirk disaster, when people still remembered the appalling price paid by the 30th Infantry Brigade (almost total annihilation) in the pointless defence of Calais, diverting at least some of the triumphant Germans in order to buy time for the armada of small boats to get the routed BEF off the beaches, it points the finger squarely at the men responsible - the laissez-faire Tories of Baldwin and Chamberlain who did absolutely nothing for an entire decade, whilst unemployment ballooned, Hitler did exactly what he felt like doing regardless of British foreign policy pledges and commitments to his victims which the Fuhrer well knew, having met them, Chamberlain and his cabinet of spineless sycophants would never honour.  Not all the Tories were to blame, of course; Churchill and his supporters, several Liberals and the leading lights of Labour all lambasted the government for letting Britain fall behind in the arms race - but, of course, Baldwin and Chamberlain could always rely on that unpardonable Labour turncoat Ramsay Macdonald and the more reactionary trade unions.

The most astonishing thing - the aspect which is so hard for hindsight to deal with - is that Chamberlain continued to beam complacently right up to the Nazi invasion of Norway (which he was telling the House would never happen when somebody slipped him a note saying it just had) and continued to serve in Churchill's cabinet as Lord President of the Council.

'Cato' was the collective pseudonym of three Beaverbrook journalists, Peter Howard, Frank Owen and Michael Foot, a future Labour leader with considerably more backbone than Macdonald.  Foot provides a preface to this edition which is considerably better than the longer and slightly tedious by John Stevenson, which covers much of the ground dealt with, with more style and venom, in the original text.

A book that names and shames - a book which caught and encapsulated the mood of its moment - a political book that is not afraid to cross party lines and praise those of different allegiance who nevertheless do the right thing.  How we need something of the same today - it was after all, a coalition government that sent the British Expeditionary Force to Flanders with bayonets against tanks, heavy cannon against flying artillery.

Politicians of right and left always bang on about the need for schools to teach British history with more Churchill in it.  We'd do well to make Guilty Men a set text.