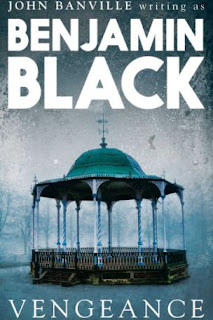 Vengeance (2012) is the fifth of the Quirke Dublin novels, now rebranded Quirke Mysteries, presumably to tie in with the forthcoming TV series.  Banville-Black writes as beautifully as ever and his distillation of period is flawless - but he does tend to forget that these are supposed to be a) mysteries and b) thrillers.  There is no mystery here - I still have no idea why a suicide needs a witness - and zero thrills.  It's a sort of Agatha Christie, dirty-deeds amid the middleclass, without the plotting but with greatly enhanced literary ability.

I don't mind the lack of plot; Black could write a shopping list and I'd still read it.  The continuing characters are developed further, the one-off characters, by and large, are distinct and well-drawn, if a little devoid of purpose.  I do wish Black had avoided the twins trap.  The same cheap trick ruined Colin Dexter for me and Monsignor Knox was making a rule forbidding it.  It's just lazy.

None of these quibbles will prevent me reading more.  The sixth Quirke Mystery, out now in hardback, is Holy Orders.  Can't wait.