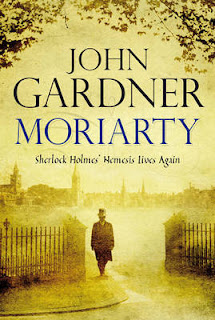 Three decades after the first two volumes (The Return of Moriarty and The Revenge of Moriarty), Gardner's third and final volume of the 'memoirs' of the Victorian super-criminal were published posthumously.  The immensely prolific Gardner died in 2007 and Moriarty appeared a year later.

Back in the day, Gardner was very famous - I remember the amount of publicity given the first two volumes, a stark contrast with the zero publicity afforded the third.  He was the first English writer to spoof the Bond genre (with his Sixties series of Boysie Oakes novels) only to be hired to by Fleming's executors to write to continuation Bonds in the Eighties.  He ended up writing fourteen original Bonds and the novelisations of two films, License to Kill and Goldeneye.  I remember reading the first, Licence Renewed but don't remember any more.  Certainly, they can't be any worse than Fleming's because Gardner is a much better writer, so it might be worth having a look.

The good news is that loads of Gardner's works are coming out in ebooks.  The Bonds are available now in America but not here yet.  The five Kruger novels are available here published by Bello, Pan's digital arm.  (I did not know that.)  The other great news is that Gardner has such a spiffy website, so his executors are clearly making an effort to keep his work alive.  Good on them.

Anyway, back to this book...  I loved Return and Revenge back in the Seventies and, only the other week, was musing on how good they were.  Then I went to the library and found this.  Did it excite me as much?  No, but I'm older and more miserable.  Did I enjoy it?  Yes, absolutely - great fun.  Did I admire it?  Again, yes - the thing about Gardner is the way he shows he has done his research without clouting you round the head with it in the manner of Len Deighton.

I think digital Gardners will be joining my digital bookshelf ere long.
Posted by rogerwood at 15:45