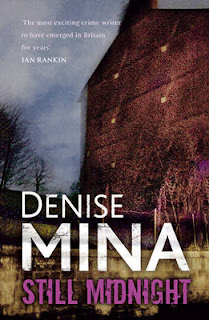 Denise Mina is often grouped with Tartan Noir novelists like Stuart MacBride and Tony Black.  She is Scottish and much of her work is crime fiction (she even has degrees in law and crime), but I would suggest a more suitable grouping of contemporary Scottish crime writing.  There is nothing especially noir about Still Midnight, the first of her DS Alex Morrow series.  Instead it is a story about the modern urban family.

Two pumped-up nutters carry out a ham-fisted home invasion on the Anwars' bungalow.  One accidentally blows sixteen year old Aleesha's hand off.  The other grabs paterfamilias Aamir, not the intended target, and bundles him into the van.  Later, he demands £2 million ransom.  Aamar runs a hole-in-the-wall newsagent's for a clientele of alkies and addicts; unless the family has a dodgy sideline, there's no way they can access money like that.

Alex Morrow has her own family secrets - her gangster father and half-brother, the domestic tragedy in her own homelife.  Her proxy family of the police service is likewise dysfunctional.  Her professional father, DI MacKechnie, favours her 'sibling' DS Bannerman, who is smug, self-satisfied and destined for higher things.

Then there is a third family, the gangland Tait clan, who it turns out have significant links.

It is all expertly handled.  The writing is shrewdly judged, always appropriate, handling difficult issues like race without either patronising or sermonising.  Even the happy(ish) ending, which would have jarred horribly if this really was Tartan Noir, succeeds because Mina has taken time to build her characters and make them all multi-faceted.

It is a bloody good read, and I want more.