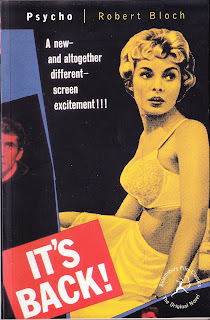 Bloch's 1959 classic, forever eclipsed by the Hitchcock movie, here in the Bloomsbury Film Classic series from the late Nineties.

First off, I was surprised by how close the movie stuck to the novel.  Hitchcock hagiographies suggest the Master made many drastic changes but the book itself disproves this.  In one of recent spate of Hitchcock biopics Alma persuades Hitch to bump the Janet Leigh character off good and early - but Bloch does it at exactly the same point.

The big difference is the character of Norman Bates.  In the novel he is nothing like Anthony Perkins.  As to whether this is a good or bad thing, I am undecided.  For me, both work.  Where the novel really suffers is by going on two chapters after the denouement.  It has to be said, though, that this was typical of its era - psychology had to be explained in 1959 - and we should remember that this is the first real psycho killer novel, published only two years after Ed Gein, the model for Norman Bates, was revealed as America's first real serial killer - certainly the first to keep physical souvenirs.

Apparently Bloch wrote two sequels, Psycho II and Psycho House, both much later.  The first might be worth a look... But I'd be much more interested in his essay, 'The Shambles of Ed Gein'.
Posted by rogerwood at 14:06