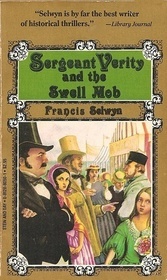 I happened upon this series by accident but will purposefully seek out more.  Francis Selwyn is a pseudonym of Donald Thomas, poet, prolific author and Emeritus Professor of English Literature at Cardiff University.  His passion appears to be Victorian crime fiction, because as well as the Verity series he has written (as Thomas) the Inspector Swain series (The Ripper's Apprentice sounds right up my street) and currently produces pseudo-Sherlocks.  His latest, Death on a Pale Horse, is due out next month.  As Selwyn he wrote Hitler's Englishman: The Crime of Lord Haw-Haw (1987), which has long been part of my collection and is my go-to research book regarding William Joyce.  Also as Selwyn he produced a book on Neville Heath which I am now looking out for.

Meanwhile, back to Sergeant Verity.  Some might say it is redolent of Peter Lovesey's seminal Sergeant Cribb series, which certainly predate Verity.  I am a great admirer of Cribb, albeit not of Lovesey's later work.  But Selwyn is the more adventurous writer and I enjoyed this, the fifth of the series, for the off-the-wall undercurrent.  Villains with names like Old Mole, Stunning Joseph, and Sealskin Kite are always going to attract me, and I also enjoyed the fact that Verity - wholly unlike Cribb - isn't all that bright.  The chase on the Brighton Parliamentary I thought was superbly done, a complex scenario executed in a genuinely thrilling style.