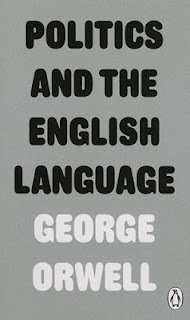 "Political language ... is designed to make lies sound truthful and murder respectable, and to give an appearance of solidity to pure wind."  So wrote Orwell in this 1945 essay and the description has never been more applicable than it is today.  "We've never had so many people working!" trumpet the Tories.  No, say I, because we've never had so many people.  Only a million or so people were working in Britain in the second half of the fourteenth century - but that was more or less everyone, percentage employment levels in the upper nineties whereas today it's what?  Less than 25%?  Over the last 30 years governments have been defined by words they completely subverted the meaning of - 'community' for Maggie Thatcher's neo-Nazis, 'trust' for New Labour.  'Reform' has come to mean destruction, whereas 'business' now means peculation.  Who knows what that most revolting political term, 'technocrat' actually means.

In fact Orwell was lamenting the decline of the written language generally.  If only he could have seen the damage word-processing has done.  That said, the examples he cites were unforgiveable then and remain so now.  His six rules for rescuing writing remain inarguable:

Also in this volume from Penguin's Great Ideas is Orwell's review of James Murphy's unabridged translation of Mein Kampf published immediately before the outbreak of war in 1939.  Orwell wrote in 1940 and reminds us vividly that appeasement of Hitler was official government policy until the Day War Broke Out.

"For at that date Hitler was still respectable.  He had crushed the German labour movement, and for that the property-owning classes were willing to forgive him almost anything.  Both Left and Right concurred in the very shallow notion that National Socialism was merely a version of Conservatism."

And that's something we would do well to bear in mind every time a career politician opens his or her mouth.