The Crust on its Uppers - Derek Raymond 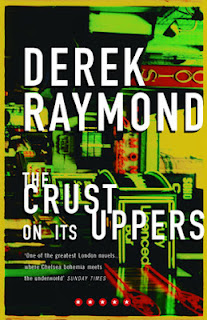 Patrick Hamilton meets Anthony Burgess and goes on a John Buchan-esque escapade across Europe - this 1962 one-off has to figure on any worthwhile list of 20th Century British classics.  There really is nothing like it, narrated in u first-person underworld cant by an unnamed toff-gone-bad.  How much is autobiographical?  Quite a bit - Raymond was himself privately educated, descended from wealth, and utterly debased, so much so that The Crust on its Uppers was originally published under his real name, Robin Cook.  Only his later books, notably the 'Factory' series, were pseudonymous because the world had become full of Robin Cooks (formulaic thriller writer, Labour politician etc).  The Factory novels are definitely on my must-acquire list.

If you like crime, if you like Augustan literature (I'm thinking Defoe and Fielding), if you are fascinated by social and cultural change in the era of the Angry Young Men, then I urge you to READ THIS BOOK!