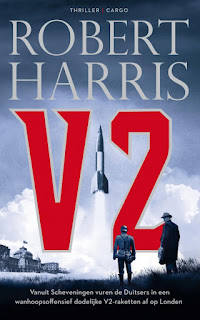 Harris yet again surprises with his ability to turn quite thin material into a compelling read.  I mean, everyone knows the story of von Braun and his V2 rockets.  We know they didn't win the war and we know they didn't do as much damage - or create as much fear - as the V1 doodlebugs.  Indeed, this story is so thin that Harris actually splits into two narratives - English woman, German man - to stretch it to an acceptable read.  And yet it is great fun, even thrilling at times.  How does he do it?

Well, he has clearly done his research.  That is a given with Harris.  He carefully gives us just about enough to show it is reliable without overburdening us as so many modern authors do.  For example, in order to make us even slightly interested in what happened at Peenemunde he gives us an RAF raid on the site in which Rudi Graf's love interest is killed.  Graf is Harris's German protagonist, a scientist, not a Nazi, and a friend of von Braun, who is an SS officer.  Our English heroine is Kay Caton-Walsh, a WAAF who sleeps with unsuitable men and blags herself into a proper war job, working out the launch site of rockets.  This is perhaps Harris's best device.  As the end of the war draws nearer, the protagonists in this novel are brought physically closer - Graf and the rockets at the Dutch resort of Sheveningen, Kay and the trajectory-trackers a few miles south at Mechelen in Belgium.  The thrilling part of the book comes when the Germans figure out the Allies are there and aim a rocket at them.

There are a couple of interesting characters who go nowhere, which unsettled me, notably a feisty girl who works in the Nazi brothel, and a psychopathic SS man who builds the rocket factory with slave labour.  V2 is a good book, and great fun to read, but with a bit more ambition it could have been outstanding.