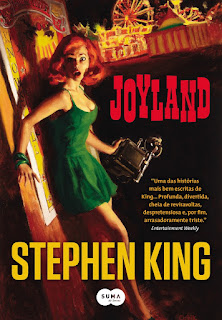 It's the summer of '73 and student Devin Jones has taken a seasonal job at an old-fashioned funfair in North Carolina.  Dev has just been dumped by his steady girlfriend and throws himself into the life of a greenhorn carny.  But the House of Horror ride was the scene of a mystery death and homes, according to those with a psychic bent, a real horror.

It must have been around the mid-70s when I picked up King's debut novel Carrie.  For the next twenty years I read pretty much every one as it came out.  But IT kind of lost me and I hated the collaboration with Peter Straub - The Talisman, was it?  I think Dolores Claiborne (1992) was the last one I bought.  But I am a real fan of Hard Case Crime publications and when I realised that the soon-to-arrive Later was the third of three written specifically for HCC, I had to get one.

Joyland (2013) is the second of the three (the first is The Colorado Kid (2005)).  I romped through it.  King's plots got a little samey back in the day but the writing never paled.  He started as a writer pushing the envelope and has matured over forty-plus years into probably the best living writer of popular fiction.  The key is, he has never become small-minded or - despite his phenomenal sales and big-budget movie adaptations - in anyway arrogant.  He sets out to intrigue and entertain and he delivers every time.

In summary, Joyland is a coming-of-age story with an overarching mystery and a couple of substantial jolts of horror.  Because it is short - and King is the absolute master of the shorter form - it bowls along merrily right to the end.  It looks like I have some catching up with King to do.  I was always going to get Later when it comes out in the UK.  Looks like I might need to tide myself over with The Colorado Kid.