A Presumption of Innocence - Ludovic Kennedy 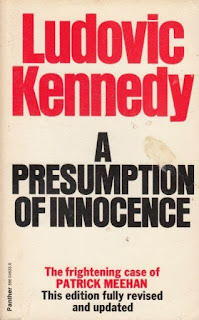 Last month I read and reviewed Denise Mina's Field of Blood.  The heroine of that novel was Paddy Meehan, taking her nickname from the real victim of a famous Scottish miscarriage of justice from 1969 which I had never heard of.  This surprised me: miscarriages of justice were already a keen interest of mine at the time (mainly prompted by the Guilford Four).  Naturally I had to find out and I knew from Mina that it was one of Ludovic Kennedy's crusades, which I first learned about around 1969-70 when they made the movie of 10 Rillington Place.

So, inevitably, I hit ebay and got myself a copy of A Presumption of Innocence.

Now, this paperback is an updated edition issued after Meehan was pardoned.  I may yet feel obliged to try and access the original, because the only reason Meehan got pardoned was because of the furore caused by Kennedy's book.  Things in the original that can only have been conjecture appear here as fact (which they might not be, given that Meehan was pardoned, not exonerated at appeal) and any leads which led nowhere have probably been excised.  One of the latter, I suspect, is Meehan's frankly bizarre claim that he - a Glaswegian safe cracker - had been a spy in East Germany, which is reduced here to a frankly meaningless stub.  To be even franker, this paperback was obviously a rushed job issued to capitalise on Meehan's brief moment of fame, and it shows.

Meat cleaver editing, however, cannot hide the facts of the case, which are truly alarming.  Meehan effectively put himself in the frame by ringing the police with information about the murder of Mrs Ross in Ayr in July 1969.  Mrs Ross's husband, who survived, said the attackers called themselves Pat and Jim.  Meehan's story was that he had been out of town sizing up a proposed crime in Stranraer with a friend and fellow criminal who just happened to be called Jim.  On the way back to Glasgow in the early hours he thought he might have come across the Ross killers, hence the call.  He didn't actually give his mate's full name because Jim Griffiths was on the run.  It took the police only hours to find out who he was - resulting in an armed siege in which Griffiths was killed by police. having shot and killed one officer and injuring several more.  Thus Meehan eventually stood trial with a dead man whose record could be revealed to the jury.  This tended to obscure the fact that Mr Abraham Ross, himself Glasgow born, was sure his attackers both had Glasgow accents whereas Jim Griffiths was from Lancashire and had a strong Northern accent.

Kennedy infers that the police rigged Meehan's identity parade and planted incriminating evidence in Griffiths' car coat after his death.  This might have come out at appeal and caused a scandal - hence the pardon.

Meehan had, however, spent seven years in prison by the time the book came out and had used up all his appeals.  One of the grounds of appeal - and one of his lines of defence at the original trial - was that someone else had killed Mrs Ross.  Not the usual person unknown but a named individual, Ian Waddell, who (unbelievably) was a defence witness at the trial and who (not the sharpest knife in the box) had regularly confessed to the Press over the years since.

Given all that, I still cannot understand why Paddy Meehan hasn't become a byword for police malice and injustice south of the Border.  I can't find anyone (and as a member of the judiciary I know a number of the right people) who has even heard of the case.  An armed siege in the centre of a major city in which policemen are shot at?  Imagine if that had been London, Manchester, Birmingham or indeed anywhere in England!  Remember for example the wall-to-wall coverage of Harry Roberts, four or five years before Griffiths.

It's a must-read if you are at all interested in the justice system - but make sure you get a first edition.