Up the Walls of the World - James Tiptree Jnr 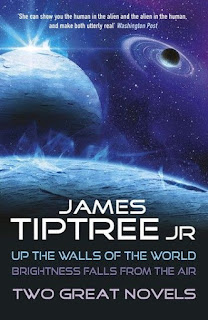 James Tiptree Jnr only wrote two novels, and this is the first of them.  For a debut novel, Up the Walls of the World seems remarkably accomplished, but then everything about James Tiptree Jnr was remarkable.  For a start, 'James T Tiptree' was a pseudonym, not in itself unusual in the literature of sci fi.  Next, he was actually a she - Alice Bradley Sheldon (1915-1987), who was a trained artist, intelligence officer in WW2, bisexual, a late returner to advanced education who ultimately got her doctorate when, like me, she was 52.  She didn't publish a sci fi story until 1968, then quickly mastered the form, ultimately publishing nine collections.  Up the Walls of the World came in 1978.

The story is set on three 'worlds'.  We start in interstellar space where a vast entity, so big it can destroy or make worlds, floats, not quite inert, pondering the mission of which it has a conception more instinctive than intellectual.  Next is the windy planet of Tyree, where squid fly, communicate in colour, where males tend the children while females do the gathering and exploring.  The Elders of Tyree are aware of the coming of the Destroyer.  Then to contemporary Earth, where ESP researchers are doing experiments on a group of psychics.  The inhabitants of the Earth and Tyree collide, displacing identities from bodies.  Then they all migrate to the nervous system of the Destroyer...

I was amazed, enthralled - inspired.  A whole new dimension of sci fi opened up to me.  Fortunately, the other novel is also in this ebook.  Then I must progress to the stories.

In case anyone is wondering if it was happy ever after for Sheldon/Tiptree, think again.  In 1987 she shot her husband, phoned her attorney and then killed herself.