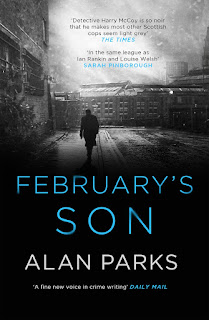 I read Parks' first, Bloody January, in bloody January, which was apt. Damned if I was going to wait until next February to read the second in the Harry McCoy series, which is this, February's Son. It starts three weeks after Bloody January ended. McCoy has recovered from his injuries and is called into work the day before his sick leave was supposed to end. This being Glasgow in 1973, there has been a murder, a nasty one. The victim is the current star of Celtic FC and soon-to-be son-in-law of the murderous Jake Scobie, head of one of the Glasgow crime families. Has Jake heard that young Charlie has been playing away? It's a promising line of inquiry, but it grinds to a halt when Jake is butchered in just the same way.

Meanwhile McCoy's friend and childhood protector Stevie Cooper has seen a picture of one of their abusers, 'Uncle Kenny', in the paper. Now they know who Kenny is, can Cooper and McCoy let things lie? We all know that's unlikely.

As I said back in January, Parks is a real find, a direct heir to Ian Rankin, albeit they are about the same age. The police side of his stories is pure procedural with all the banter and implicit loyalties and feuds that involves. The noir side is very dark indeed. Everybody over the last decade has done a child abuse storyline, but Parks has his lead cop as a victim who carries his abuse with him for life.

February's Son is absolutely as good as Bloody January, maybe even slightly better. I like, for example, the way McCoy's relationship with Susan is handled, and the development of the role of Jumbo. The ending is again just a fraction contrived, but this is my one and only criticism. I loved it. Roll on March!
Posted by rogerwood at 12:54