Even the Dead - Benjamin Black

I was so appalled by The Lemur that I have avoided anything by Black over the last couple of years. I was in two minds when I saw this on the library shelf. Had he cheapened or otherwise banjaxed Quirke, one of the best crime series of recent years? Mercifully not. If anything, I am heartily relieved to say, Quirke continues to get better. 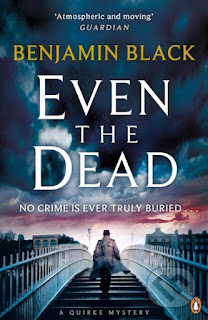 Quirke's drinking has finally caught up with him. He is cloistered at Mal and Rose's house, wondering if he will ever go back to the pathology lab, when his assistant and prospective son-in-law David Sinclair pops in for a second opinion. Leon Corless, son of a notorious Irish communist, has been found dead in a burning car. David thinks young Corless was dead before the car hit the tree. So does Quirke. So does Inspector Hackett.


So the story gets under way. It is full of all the usual tropes - conspiracy, the Church, baby-farming, dark deeds of the recent past, and Joe Costigan, Quirke's equivalent of Professor Moriarty. But as ever with the best of Benjamin Black, it is the storytelling rather than the story that keeps us hooked. The gentle friction between long-established characters, the Byzantine interconnections of the tiny upper middleclass of 1950s Dublin, the steady plod of life's wheel. Malachy is ailing, David is restless, Quirke has a new woman in his life. Evelyn Blake is the perfect match for Quirke because she exemplifies everything familiar about his tight little world: she might be an Austrian psychiatrist but Quirke knew her late husband, a drunken doctor who worked at Quirke's hospital, and Quirke used that connection to get his daughter Phoebe a job as Evelyn's receptionist.


As ever, there is great pleasure to be had in characters who are only passing through: Leon's father Sam, whose politics have cost him everything including perhaps his only child, and the loathsome rent-collector/enforcer Abercrombie. Both men, one of them a widower, the other surely never married, live in ghastly rooms above shabby shops. Black takes obvious glee in forensically detailing the grot.
Posted by rogerwood at 16:12