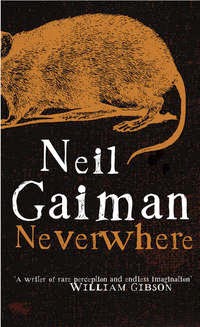 I remember Neverwhere the original TV series back in 1996.  I remember quite liking it, but those were busy times for me, long before any sort of recording equipment in my house, and I don't think I watched everything.  Recently, Neil Gaiman has been cropping up a lot in my reading.  When I saw this in Hunt's bookshop in Rugby I thought, why not?

There are two versions of the Neverwhere novel, the TV tie-in from 1997 and this, the author's preferred text, from 2000.  What the differences are, I don't know.  Anyway, just be to clear, I am reviewing the 2000 version, which we must take as the definitive one.

I keep saying I'm not a big fan of sci-fi or fantasy, and I keep reviewing them.  Obviously, these days, I must state I am quite a fan of witty fantasy and reasonably down-to-earth sci-fi (i.e. not cowboys in space).  What I really like are fantasies set in the dark underbelly of London, the London nobody knows.  Thus William Gibson's Zero History, Kim Newman's Anno Dracula (of which I have just a acquired the second volume), the Felix Castor series by Neil Carey (like Gaiman, a renowned British practitioner of US cult comics), and - probably my favourite - Rivers of London by Ben Aaronovitch.  Neverwhere keeps good company.  The TV origins are evident but I don't find that a problem in any way.  I wonder, though, how well Nineties Visual Effects coped with the grand set pieces like the Floating Market in Harrod's basement.  As to how I will soon find out, see below.

The characters are likeable and well-drawn.  Poor old Richard, who finds himself marooned in London below simply by being a good samaritan.  Door, the recipient of his generosity and the girl with a mission.  The flamboyant Marquis de Carabas, the Morecambe and Wise of hired killers Croup and Vandemar, various rats and, of course, the Angel Islington.  The invention is unceasing, the wit flows flee and I really enjoyed it.  Indeed, I enjoyed it so much that I immediately laid hands on a DVD of the BBC series, which I will ultimately be reviewing and comparing on my Media & Culture blog.
Posted by rogerwood at 15:45