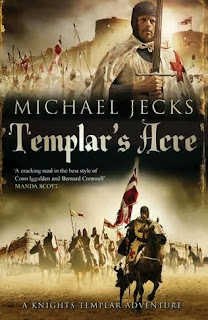 The thirty-first, latest, and - for the time being at least - last of Jecks' novels featuring Sir Baldwin, the crusader-turned-coroner.  Actually, Templar's Acre is not a medieval mystery but a prequel in which the teenage Baldwin travels to Outremer to purge his guilt by preserving the city of Acre, the last Christian city in the Holy Land.

I've commented before on this blog that Jecks' attachment to his hero seems to have been weakening.  One recent novel didn't have him appear at all until well into the action.  But here Baldwin is well-served and central.  Jecks knows his stuff and is not afraid to show his knowledge.  The siege is expertly handled, making us feel the tedium of days and nights on the city walls without ever subjecting us to similar tedium.

I enjoyed it hugely and hope Jecks is soon back on home turf.  It will nevertheless be interesting to see what he comes up with next.
Posted by rogerwood at 17:19