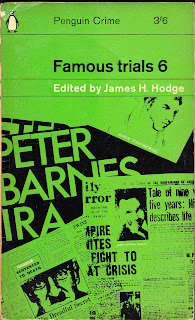 Another in the endlessly fascinating series, this time comprising four cases, the Regency lowlifes Thurtell and Hunt, the appalling Nodder (the one with the Hitler 'tash on the cover), IRA bomber Peter Barnes, and the so-called vampire John George Haigh.

The Thurtell case is only really of interested to those of us interested in the Regency underworld, a sordid falling out among thieves, notably chiefly for the peripheral involvement of Pierce Egan.  I've been reading the book piecemeal over the last few weeks and, to be honest, can't remember how Hunt was involved.  The case of Frederick Nodder (1937) is an early example of a murdering paedophile, revolting as all such cases inevitably are.

The collection starts to come alive with the case of Barnes, who was  one of those behind the Coventry outrage of August 1939.  Coming just a week before the declaration of World War II the incident is forgotten now but was particularly nasty.  Someone, who was never discovered, left a bomb on a bike by Broadgate, smack in the city centre, round where Primark now stands.  Five people were killed and score injured, twelve grievously. Letitia Fairfield provides a useful background to the IRA campaign on the mainland between the establishment of the Free State and independence.

Haigh, though, is the star of the show, a smalltime crook straight out of the works of Patrick Hamilton.  Haigh, of course, is the acid bath murderer, who dissolved his victims in a Croydon lock-up.  He tried to save himself from the noose by claiming to be a vampire when in reality his motive was purely monetary.  Not much of a schemer, he rather gave the game away by asking one of the interviewing detectives whether anyone was ever released from Broadmoor.

As always, great fun for fans of the true-crime genre.
Posted by rogerwood at 15:44