The Inspector and Silence - Hakan Nesser 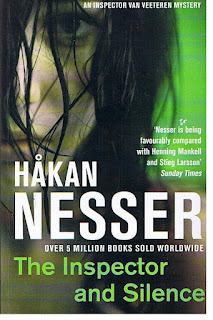 This is marketed as Nordic Noir (see the essential comparison to Mankell and Larsson on the front cover).  Nesser is Swedish but his fictional world certainly isn't.  In fact, it isn't really anywhere other than Northern Europe, albeit the series detective, Inspector Van Veeteren, has a Dutch name as do most of the other characters and places.  But it's not Holland.  It's an imaginary amalgam.  And that makes it ever so slightly odd.

The story is a cracker.  Pubescent girls in a loony religious retreat are raped and murdered.  Obviously the pseudo Messiah in charge is suspect number one, but then---

Nesser is clearly highly intelligent - the pages crackle with it and you know that here is a writer who has long, meaningful conversations with his characters.  He handles story structure brilliantly, but this isn't really Noir, more a police procedural.  Even though this predates the Nordic boom (1997) and is well on in the series, Nesser manages to avoid cliche.   Instead of a drink problem, one of his secondary policemen has an artificial leg.  Far from dreading retirement, Van Veeteren can't wait for it.  Indeed, I understand the series continues with him as a private citizen.

OK, I figured out the killer by two-thirds of the way through, but it doesn't really matter because it isn't that kind of novel.  A discovery - I will definitely read more.