A Plague of Heretics - Bernard Knight 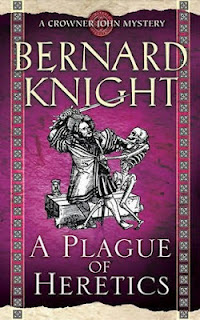 The fourteenth in the Crowner John series, and Knight is on top form - straight into the action, plague on page 5, heretic on page 8.  The mystery covers both strands and I didn't get the culprit until Knight intended me to.

What I like about Knight, more than his fellow Medieval Murderers, is that his characters have such rich personal lives outside the mystery.  There are as many twists in the character development as there are in the murder, and I certainly didn't see the big twist in Chapter Sixteen coming.  It takes a confident author to pull a stroke like that, and yet I can't wait to see how it plays out in the next instalment.

If there is to be a next instalment, that is...  Knight normally knocks out a Crowner John on an annual basis but Plague of Heretics was published in 2010.  Since then he has been launching a new series, the Wye Valley series, which is only midly historical, being set in 1955.

Apparently, Knight is working on a Crowner John prequel.  Hm...
Posted by rogerwood at 16:55