The War in the Air - H G Wells 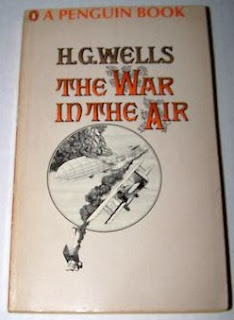 This 1908 classic is one of Wells's lesser-known 'scientific romances'.  To my mind, it benefits from having a Mr Polly/Kipps-style everyman - Bert Smallways - as its hero.  Bert is hapless, his involvement in the titular war is accidental - but it also determines the outcome and Bert is equipped at the outset with the skills necessary for him to turn the tide.

To a far greater extent than Wars of the Worlds, Invisible Man or Time Machine, enjoyable though they are, War in the Air accurately predicts much of what was to come, not only murderous air raids but social and political trends.

Even in 1908 (probably earlier, because War in the Air was serialised in the Pall Mall Magazine before being published in book form) Wells accurately foresaw....
Fascinating.  With historical hindsight the diagnosis seems so right, yet so little of it came to pass, but still these are the very same threats to supposed world order that a malign press and untrammelled political cadre use to bludgeon us into cowed obedience a clear century later.  What did come to pass, which Wells predicts with worrying accuracy, were the said press, ineffective government, even the Credit Crunch.
On the other hand, he did also postulate a worldwide monorail system and gyroscopically-controlled two-wheeled cars.  Nevertheless, even when Wells sets outside to be frivolous, or offers us a simple adventure story, he cannot resist the considered critique on the world as it was and is.  The hallmark of a true literary great.

Book of the blog thus far.
Posted by rogerwood at 11:31